2. Mrs. Hartzell is a 34-year-old patient who has presented for nutritional counseling because she is a vegetarian. Deficiency of which of the following is a concern in the vegetarian diet?

3. The most superior part of the stomach is the:

4. When recording physical findings, which data are recorded first for all systems?

5. Mr. Kevin Marks is a new health care provider. What is the best method to develop cultural competence?

6. To perform the Rinne test, place the tuning fork on the:

7. When are open-ended questions generally most useful?

8. The review of systems is a component of the:

10. Pigmented, raised, warty lesions over the face and trunk should be assessed by an experienced practitioner who can distinguish:

11. Mr. Franklin is speaking with you, the health care provider, about his respiratory problem. Mr. Franklin says, "I've had this cough for 3 days, and it's getting worse." You reply, "Tell me more about your cough." Mr. Franklin states, "I wish I could tell you more. That's why I'm here. You tell me what's wrong!" Which caregiver response would be most appropriate for enhancing communication?

12. The term denoting the caregiver's need to do no harm to the patient is:

14. Mr. Abdul is a 40-year-old Middle Eastern man who presents to the office for a first visit with the complaint of new abdominal pain. You are concerned about violating a cultural prohibition when you prepare to do his rectal examination. The best tactic would be to:

15. Your patient is complaining of acute, intense sharp epigastric pain that radiates to the back and left scapula with nausea and vomiting. Based on this history, your prioritized physical examination should be to:

16. When examining the skull of a 4-month-old baby, you should normally find:

17. Ms. G. is being seen for her routine physical examination. She is a college graduate and president of a research firm. Although her exact salary is unknown, she has adequate health insurance. Most of the above information is part of Ms. G.'s _____ history.

18. During an interview, tears appear in the patient's eyes and his voice becomes shaky. Initially, you should:

19. Before performing an abdominal examination, the examiner should:

21. Nuchal rigidity is most commonly associated with:

22. A serous membrane that lines the abdominal cavity and forms a protective cover for many abdominal structures is the:

23. A flat, nonpalpable lesion is described as a macule if the diameter is:

24. Bulging of an amber tympanic membrane without mobility is most often associated with:

25. The position on a clock, topographic notations, and anatomic landmarks:

26. When assessing abdominal pain in a college-age woman, one must include:

27. The infant should be placed in which position to have his or her height or length measured?

28. A fixed image of any group that rejects its potential for originality or individuality is known as a(n):STEREOTYPE

29. Sweat glands, hair, and nails are all formed from:

30. MR. WALTERS, A 32-YEAR-OLD PATIENT, TELLS YOU THAT HIS EARS ARE "STOPPED UP." AN OBJECTIVE ASSESSMENT OF THIS COMPLAINT IS ACHIEVED BY USING THE:

33. Mr. Black is a 44-year-old patient who presents to the clinic with complaints of neck pain that he thinks is from his job involving computer data entry. As the examiner, you are checking the range of motion in his neck and note the greatest degree of cervical mobility is at:

34. The most common form of birth trauma of the scalp is:

35. Which question would be considered a leading question?

36. A brief statement of the reason the patient is seeking health care is called the:

37. Your patient is complaining of acute, intense sharp epigastric pain that radiates to the back and left scapula with nausea and vomiting. Based on this history, your prioritized physical examination should be to:

38. A tool used to screen adolescents for alcoholism is the:CRAFFT

40. Mr. Johnson presents with a freely movable cystic mass in the midline of the high neck region at the base of the tongue. This is most likely a:

41. When hearing is evaluated, which cranial nerve is being tested?

43. Mr. Marks is a 66-year-old patient who presents for a physical examination to the clinic. Which question has the most potential for exploring a patient's cultural beliefs related to a health problem?

44. You are examining a pregnant patient and have noted a vascular lesion. When you Blanche over the vascular lesion, the site blanches and refills evenly from the center outward. The nurse documents this lesion as a:TELANGIECTASIA

45. A blood pressure cuff bladder should be long enough to:

46. A college student comes to the student health center complaining of difficulty in concentrating during class and while studying. The diet that would contribute to this problem is one that consumes mostly:

47. After a thorough inspection of the abdomen, the next assessment step is:

48. Mr. Mathews is a 47-year-old patient who presents for a routine physical examination. On examination, you have noted a bruit heard over the thyroid. This is suggestive of:

49. During percussion, a dull tone is expected to be heard over:

50. Which of the following occurs when firm pressure is used to apply the stethoscope's bell end-piece to the skin?IT FUNCTIONALLY CONVERTS TO A DIAPHRAGM END-PIECE.

51. When communicating with older children and teenagers, you should be sensitive to their:

52. To approximate vocal frequencies, which tuning fork should be used to assess hearing?

53. You are palpating a patient's thyroid and find that its broadest dimension measures 4 cm. The right lobe is 25% larger than the left. These data would indicate:

54. When you are questioning a patient regarding alcohol intake, she tells you that she is only a social drinker. Which initial response is appropriate?

56. Subjective and symptomatic data are:

57. You are collecting a history from an 11-year-old girl. Her mother is sitting next to her in the examination room. When collecting history from older children or adolescents, they should be:

58. Which technique is most likely to result in the patient's understanding of questions?

59. Mr. and Mrs. Johnson have presented to the office with their infant son with complaints of ear drainage. When examining an infant's middle ear, the nurse should use one hand to stabilize the otoscope against the head while using the other hand to:

60. Unusual white areas on the skin may be due to:

61. George Michaels, a 22-year-old patient, tells the nurse that he is here today to "check his allergies." He has been having "green nasal discharge" for the last 72 hours. How would the nurse document his reason for seeking care?

62. To correctly document absent bowel sounds, one must listen continuously for:

63. Which of the following formats would be used for visits that address problems not yet identified in the problem-oriented medical record (POMR)?

64. Which type of speculum should be used to examine a patient's tympanic membrane?

65. Ms. Jones is a 31-year-old female patient who presents for a routine physical examination. Which examination technique will be used first?

66. In counseling a client regarding nutrition education, you explain that linoleic acid, a major fatty acid, is thought to be essential for:

67. Mr. D. complains of a headache. During the history, he mentions his use of alcohol and illicit drugs. This information would most likely belong in the:

68. Peritonitis produces bowel sounds that are:

69. The recommended minimum daily protein requirement for the normal adult is ______.14% TO 20% OF TOTAL CALORIES.

70. As part of your health promotion education for a new patient, you explain that the risk factors for skin cancer include:

71. Which is the best way to position a patient's neck for palpation of the thyroid?

72. When taking a history, you should:

73. Ms. Otten is a 45-year-old patient who presents with a complaint of weight gain. Which medication is frequently associated with weight gain?

74. Which of the following is an expected change in the assessment of the thyroid during pregnancy?

75. Brittle nails are typical findings in:

76. Regardless of the origin, discharge is described by noting:COLOR AND CONSISTENCY

78. Mrs. Britton brings her 16-year-old son in with a complaint that he is not developing correctly into adolescence. Which structures disproportionately enlarge in the male during adolescence?IN THE MALE ADOLESCENT, THE NOSE AND THYROID CARTILAGE ENLARGE, AND FACIAL HAIR DEVELOPS, EMERGING FIRST ON THE UPPER LIP, THEN THE CHEEKS, LOWER LIP AND CHIN.

79. Mr. Mills is a 55-year-old patient who presents to the office for an initial visit for health promotion. A survey of mobility and activities of daily living (ADLs) is part of a(an):

81. A 5-year-old child presents with nasal congestion and a headache. To assess for sinus tenderness you should palpate over the:

83. Which statement is true regarding the relationship of physical characteristics and culture?

84. A guideline for history taking is for caregivers to:

85. A 17-year-old girl presents to the clinic for a sports physical. Physical examination findings reveal bradycardia, multiple erosions of tooth enamel, and scars on her knuckles. She appears healthy otherwise. You should ask her if she:

86. During an interview, you have the impression that a patient may be considering suicide. Which action is essential?

87. Mrs. Leonard brings her newborn infant into the pediatrician's office for a first well-baby visit. As the health care provider, you teach her that newborns are more vulnerable to hypothermia due to:

88. Your patient returns for a blood pressure check 2 weeks after a visit during which you performed a complete history and physical. This visit would be documented by creating a(n):

89. You are planning to palpate the abdomen of your patient. Which part of the examiner's hand is best for palpating vibration?

90. In examining the neck of a 34-year-old female patient, you note that the uppermost ridge of the tracheal cartilage is at the:

91. You are using an ophthalmoscope to examine a patient's inner eye. You rotate the lens selector clockwise, then counterclockwise to compensate for:

92. Your patient presents with symptoms that lead you to suspect acute appendicitis. Which assessment finding is least likely to be associated with this condition early in its course?

93. Under normal circumstances, how much water is lost daily by the body?

94. Tympanic thermometers measure body temperature when a probe is placed:

95. Which cranial nerves innervate the face?5 AND 7

96. Which of the following is an "ABCD" characteristic of malignant melanoma?

97. Mrs. Tuber is a 36-year-old patient who comes into the health center with complaints that her fingernails are not growing. Which structure is the site of new nail growth?

98. Which of the following is the most accurate reflection of an individual's food intake?

99. A 51-year-old woman calls with complaints of weight loss and constipation. She reports enlarged hemorrhoids and rectal bleeding. You advise her to:

100. White, rounded, or oval ulcerations surrounded by a red halo and found on the oral mucosa are: 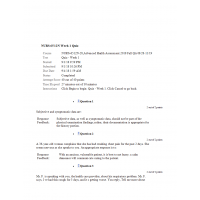 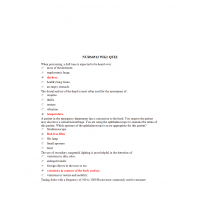 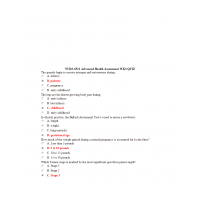 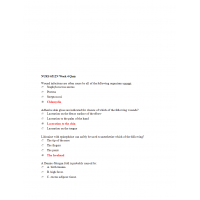 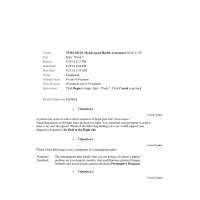 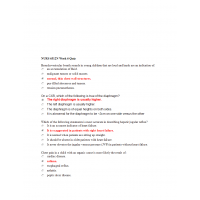 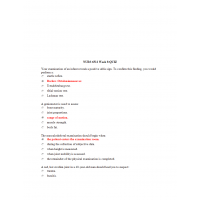 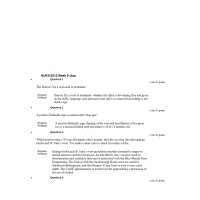 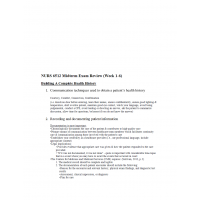 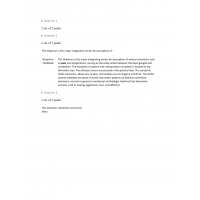 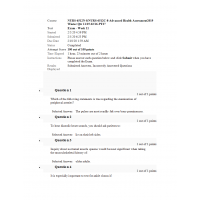 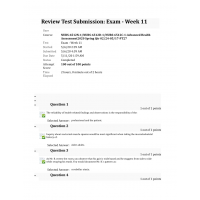 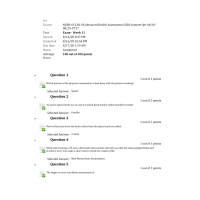 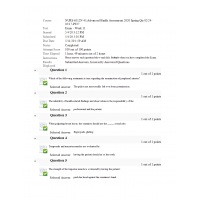 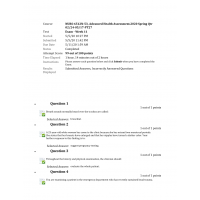 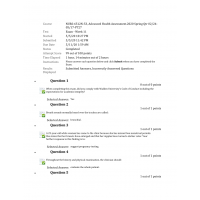 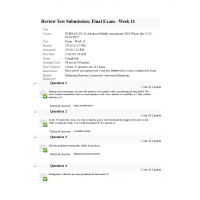 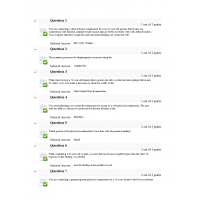 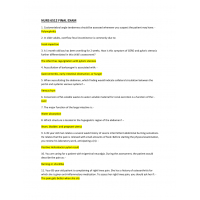 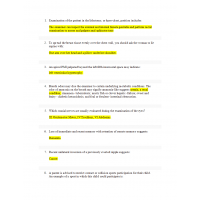 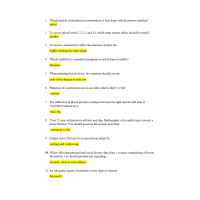