1. The delicate neural structures in the brain are protected by:

2. During development of the nervous system:

3. An action potential occurs at a specific amplitude for that neuron, regardless of the stimulus intensity or how much higher than threshold the stimulus is; this is known as the:

4. While researchers feel it is more ethical for animals to experience su$ering than humans, animal rights activists argue that this is an unacceptable and biased viewpoint called:

5.   have a branched structure and receive stimulation from other neurons.

6. Why are scientists moving slowly regarding the therapeutic use of stem cells?

7. Ongoing biological activity of a living brain can be visualized by using:

9. In the mature human brain, most changes consist of:

10. Neural plasticity refers to the:

13. The functioning of the two hemispheres is:

15. The most obvious function of the cerebellum is in movements initiated by the .

17. Which of the following is a true statement of the imaging technologies used to study brain anatomy?

18. Which of the following methods uses radioactive DNA, which will dock with messenger RNA?

19. Stem cells have been used to successfully treat all of the following except:

20. Jorge, a 63-year-old factory worker, su$ered a stroke. He can speak, but he cannot understand when spoken to. The stroke was probably in: 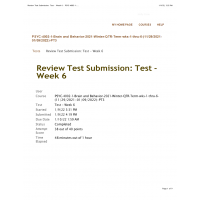