1. An example of short-acting insulin is

2. The National Youth Risk Behavior Survey (NYRBS) evaluates risk factors that contribute to violence or injuries. Which of the following has the highest percentage of noncompliance for safety?

3.The top three causes of death in adolescents are

6. A healthy eleven-year-old male had a Td booster two-year ago after stepping on a nail, but otherwise has had no immunizations since age six when his vaccinations were up to date. Which of the following vaccines would be indicated as a part of his well-child visit?

9. _____________children are less likely to be diagnosed with attention deficit disorder than others.

10. An antidepressant should be taken by a patient for at least _________ to adequately treat depressive symptoms.

11. What is one of the most important components of a presports participation physical exam?

12. Indications for immediate dialysis in the pediatric patient is hyperkalemia

13. Of the following advice, which would be most helpful for the parents of a baby with GERD?

17. Other diagnoses that must be ruled out before diagnosing a child with attention deficit hyperactivity disorder include

20. Which of the following is most accurate regarding pain assessment in the pediatric patient?

25.The best way to screen for gonorrhea in an adolescent male is

26.Which group of adolescents is more likely to develop Type 2 diabetes?

30.Antidepressant medication use in the adolescent age group should be monitored due to __________. risk of suicidal ideations

33. Which group of adolescents is more likely to develop Type 1 diabetes?

35.An early adolescent patient is more likely to have _________ regarding body image.

36.A nurse practitioner is conducting a four-year old’s well-child exam. Which recommendations would be made for this child?

37.Diet of an infant four to six months old should include

38.The adolescent should be screened for Type 1 diabetes _never

40.A two-year-old patient presents to the office with a sudden onset fever of 104 degree Fahrenheit by history. Mother reports that he suffered seizure this morning at home with his eyes rolling back that lasted for about 30 seconds. The most probable diagnosis is

41.Which of the following is not a sign or symptoms of congenital hypothyroidism?

45. A two-day-old infant in the nursery has yet to pass meconium. This is a red flag for which condition?

47. A thirteen-year-old girl has several firm, small (2 mm) white skin-colored umbilicated papules on her neck. The lesions have been present for three months and have increased in number. What is your diagnosis?

49.Eating disorders are more prevalent in females than males

50.The most common form of juvenile rheumatoid arthritis is __polyarticular.

51.The symptoms of the attention deficit hyperactivity disorder must have ________.

54.A fifteen-year-old male patient with cerebral palsy has been experiencing alteration in mood for the past two days, complains of an unusual odor, and then begins to have forceful muscle contractions followed by flaccidity then lethargy. You would describe this as a

55.Pauciarticular arthritis is identified by pain in few joints.

56.Possible side effects from attention deficit hyperactivity disorder medications include.

57.A patient who has multiple ideas regarding suicide attempt should be encouraged to discuss these thoughts and triggers for these ideations.

58.A sixteen-year-old male presents to your office accompanied by his parents. They are concerned about his absenteeism from school. You suspect the patient has ________.

made a conscious decision to miss school (truancy).

59.Insulin therapy should be initiated if the patient has an HgbA1c greater than

60.Adolescents prefer to be taken seriously.

61.Secondary epilepsy may occur at any age but is more likely to be found in infants and elderly.

62.Children who belong to an ethnic group, not Caucasian, are less likely to receive health care services.

63.The best tools for treating adolescents are _mutual trust and patient education.

65.Attention deficit hyperactivity disorder may be

66.The parents of a twelve-year old are concerned about their daughter’s fear of school. She is reluctant to go and will “come home early because she is sick.” You suspect the patient suffers from school phobia.

68.According to the NYRBS, which of the following items may be used for sniffing or huffing?

69.Two of the most common forms of headaches in children are

71.Which of the following medications should be avoided in a patient with idiopathic thrombocytopenic purpura (ITP)?

72.Symptoms of the attention deficit hyperactivity disorder must have been present at least

73.The Diagnostic and Statistical Manual of Mental Disorders, fourth edition (DSM-IV-TR) has _______ regarding ADHD.

74.The nurse practitioner sees a three-week-old infant in the clinic. Initial assessment findings show an infant with a 100.5 degree Fahrenheit rectal temperature, heart rate 120, respiratory rate 50. Upon physical exam no noted abnormalities are found. What would be the appropriate response of the primary care, clinic nurse practitioner?

75.Which of the following results would you most likely see in a child with a viral infection?

76.Symptoms of attention deficit hyperactivity disorder are present prior to __Seven. years of age.

78.The nurse practitioner would not apply which of the following strategies included as part of the initial healthcare management of a ten-year-old boy who is obese?

79.During a well-child visit, a mother expresses concern that her three-year-old child has recently started to stutter when excited. The pediatric primary care nurse practitioner informs the mother that stuttering in a preschool-aged child

80.A fourteen-year-old child without a spleen is at increased risk for which of the following?

81.A thirteen-year-old presents to your clinic with complaints of a sore throat. History reveals that he had a sore throat a couple of weeks ago and though he has gotten well, he has severe pharyngeal pain for two days duration and says he has been sweating and thinks he has fever. Pharyngeal exam reveals a temperature of 102 degree Fahrenheit and erythematous and edematous pharynx and soft palate. The right tonsil is swollen and inflamed without exudate, and the uvula is displaced to the left. Right cervical nodes are tender. Lungs are clear to auscultation. These signs and symptoms are suggestive of

82.The insulin requirement for a Type 1 diabetic is determined by:

83.Juvenile rheumatoid arthritis is believed to be

85.Failure to thrive with weight loss, hematochezia, abdominal pain, and diarrhea in an adolescent is suggestive of

86.___________ increases a child’s risk of being diagnosed with attention deficit hyperactivity disorder.

87.Which of the following findings could be expected to occur in a baby with intussusception?

88.A fifteen-year-old Type 1 diabetic patient requires fifty units of insulin daily. You will divide this insulin requirement into

89.The nurse practitioner recognizes which of the following signs as indicators that baby is not receiving sufficient breastmilk from the mother?

90.In newborn period, infants of diabetic mothers are particularly at risk forhypoglycemia

92.A two-week-old infant is in the clinic for a scheduled weight check. The best indication that the infant is receiving adequate breastmilk is that the baby

93.ADHDs are likely to affect

94.Bipolar disease is often diagnosed in

95.An adolescent with which of the following would not be considered at an increased risk for dental erosion?

96.The most common form of child abuse seen in pediatric primary care is

97.Some children with attention deficit hyperactivity disorder have been found to have is  Tourette’s syndrome.

98.Children with disabilities are guaranteed a free and appropriate education by three federal laws: Section 504 of the Rehabilitation Act, IDEA, and the Americans with Disabilities Act.

99.Which of the following is not found in an adolescent with untreated Graves' disease?

100.The best way to screen for gonorrhea in an adolescent female is 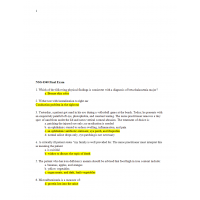 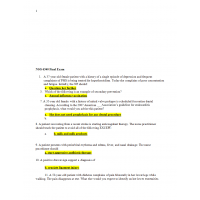