1. The school psychologist administered a series of tests and observed the student in the classroom to determine if he should be placed in the special education class. This process is called

2. Which one of the following represents the narrowest set of things to be done?

3. An example of a nominal measurement scale is

4. Organizing and summarizing data in a parsimonious manner is the result of using

5. All of the following are characteristics of frequency distributions EXCEPT

6. A teacher works with her class in such an effective manner that all but a few of the students master the material at a very high level. The exam scores for these classes are likely to be distributed as

7. The major concern related to using the mean as a measure of central tendency is its

9. A researcher found a strong negative correlation between hours of viewing television and grades in school. This means that

10. Which of the following statements reflects the characteristics of validity?

12. The authors of the new math test administered the same test to a group of fourth-graders in the beginning and the end of the same day. A reliability coefficient of .90 was obtained using this method, and the authors claimed that their test had high reliability. Were the authors correct in making this claim and why?

15. If a test is administered to one class of students and the scores from it have very little variation in comparison to the other classes, what is likely to happen to reliability of the test for that class?

16. Which is the implication of the statement, "Reliability is necessary but not sufficient for validity."?

17. Ms. Carter, the special education teacher, has to develop individualized educational programs for all the students in her class. What type of tests should she use to identify what the students do and do not know in each area?

18. A standardized test is characterized by all of the following EXCEPT

20. Standardized aptitude tests are used to

21. If a subject was influenced by social desirability in his response to questions, what type of instrument would be most affected?

22. It is important to examine the operational definition of a non-cognitive trait because

23. A response in which subjects check a point on a continuum between two adjectives is called a

24. Which of the following is an example of faking?

25. An advantage of observation as a type of data collection method is

26. High-inference observations require the observer to

27. A sixth-grade teacher was required to complete a rating scale for one of the students in her class. The student was performing poorly in all academic subjects, so the teacher rated her as low in intelligence, perseverance, honesty, friendliness, and other aspects of personality. The results may be inaccurate due to

28. One weakness of using interviews rather than a self-report questionnaire is that

29. According to the author, the most common type of interview question in educational research is

30. the most efficient way to increase the reliability of responses to interview questions is to 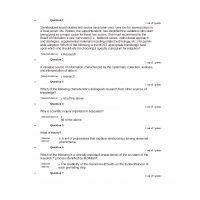 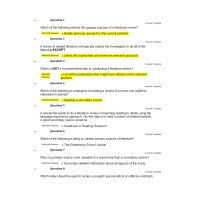 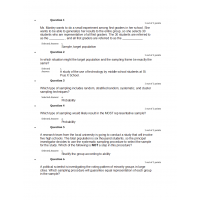 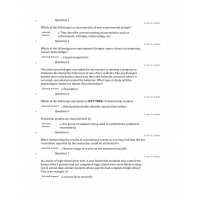 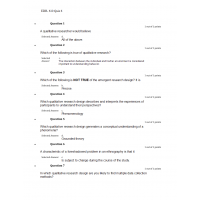